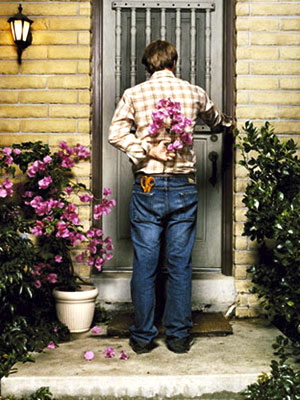 Let me begin by saying I realize your lot in life is as far as Fiji from mine.  I have no idea what it’s like to be a single guy in 2014.  But you and I do have one thing in common.  Both of us care about single girls.  Recently, some of my favorite ones have opened my eyes to the terrors of dating in the 21st century.  WIth that in mind, I thought I might offer a little insight into wooing the fairer sex.  I’m certainly no expert–my only qualification is this one extra X chromosome.  But for what it’s worth, here’s some advice from a girl:

Be confident in who you are.  I know it’s cliché, but nothing exudes insecurity faster than showing-off.  Trust me, no matter how politely she smiles, she knows you don’t really have $100,000 to invest in an up-and-coming business, knows you didn’t once date Katie Holmes, and is probably groaning inside if you’re telling her how much you can curl.  If there’s one thing she really will be impressed by, it’s sincerity.  Being genuine and humble demonstrates confidence.  Ego brags.  Confidence doesn’t have to.

Focus more on the “connection” factor than the “cool date” factor.  In other words, don’t drop $150 on a botanical garden carriage ride and then stare at her like a mute statue or *shudder* text your friends the whole time.  Sure a cool date’s great, but it will never make up for a lack of connection.  Which means you need to plan more than the date–you need to plan the conversation.  I once read a marriage book that said women long to be explored.  It’s the reason girlfriends can talk for hours at a coffee shop.  We want to be discovered…more than we want to smell botanical flowers, or perhaps best yet, while we smell botanical flowers 🙂

Err on the side of being a gentlemen.  With the rise of the women’s-lib movement, I can see why it’d be confusing to know whether or not to open her door or pay for her meal.  But you’re a lot less likely to offend by being more of a gentleman than less of one.  If she tells you, “I’ve got it” when you open the door–no big deal.  But if she’s looking for a gentleman and ends up having to pick up the tab, don’t expect a second date.

Adjust your expectations.  If you’re waiting for a girl who looks like J Lo and loves college football, don’t hold your breath.  I’m not saying you shouldn’t have standards, just consider them carefully.  That shy girl from church may just need a cup of coffee and a cinnamon roll to become the most interesting person you’ve ever had a conversation with.  That really un-athletic friend of your sister’s may look at you like you’re Lebron James when you play basketball like Kevin James.  Or maybe not.  The thing is, there’s only one way to find out.

Don’t be afraid to stand up to her.  There’s a big difference between a control-freak and a leader.  One is rooted in pride, and the other is rooted in love and service.  Once you’ve built a trusting relationship with her, be brave enough to speak into her life in ways that will challenge and edify her.  At the end of the day, no matter how much we balk, (most) women don’t really want a yes-man.  They want a man they can respect.

One thought on “5 Dating Tips for Single Guys”